We have seasonal specials available throughout the year.

In 2010 it was announced at the Swiss Grand Resort, Bondi, that Brabham’s Outdoor Power Centre had won not only the State award but also the National award given by Stihl Australia came as a welcome surprise.

Paul Brabham said at the awards ceremony that, “the business owed the award to the amazing support it has received from customers who have helped it grow through an amazing range of Stihl products” – chainsaws, brush cutters, hedgers, vacuums, cut quick saws and high-pressure cleaners.

Loyal customers have included Bathurst and district farmers, hobby farmers who need small equipment to make work easier, householders with yards to tend as well as small professionals in industry.

The family which owns Brabham’s Outdoor Power Centre was overwhelmed after firstly carrying off the western regional award for a second time. 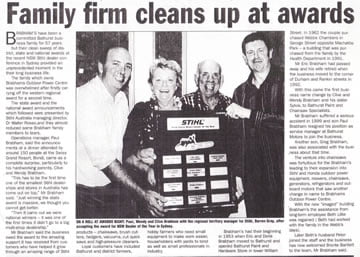